Virtual screenwriting workshop with Tananarive Due and Steven Barnes January 10-31, 2015

Are you working on a screenplay, or do you have a screenplay idea you’re not sure how to start?

Do you want input from industry professionals on your screenplay idea?

Are you an author who would like to learn to adapt your books to film?

Whether you’re a screenwriter, a novelist or a producer, there has never been a more exciting time to try to get your foot in the door in television and film. But it all begins on the page – with a terrific screenplay or teleplay.

After a successful fall workshop, authors and screenwriters Steven Barnes and Tananarive Due (WGA) are offering an online screenwriting workshop Jan. 10-31 to help you whip your project into shape. Until Dec. 31st, register at our Christmas rate for $300. Regular registration if $350–so save $50 by registering now. Space is limited.

Here’s what one of our writers said midway through our fall workshop: “I want to thank you and Steve for an incredible experience thus far.  I have truly learned a lot…..and I went to FILM SCHOOL!”

Here’s what you get:

Here’s what the workshop requires: 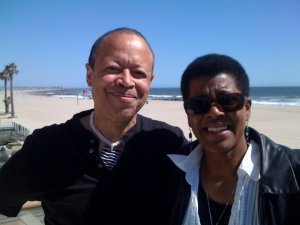 Who are the instructors?

New York Times bestseller Steven Barnes has written more than twenty-five science fiction, fantasy, and horror novels. His “Stitch in Time” episode of “The Outer Limits” won an Emmy. The NAACP Image Award winner also has written for “The New Twilight Zone,” “StarGate,” Andromeda,” and “Ben 10.” He has been nominated for  written for Hugo, Nebula and Cable Ace Awards. In 2013, he and his wife, Tananarive Due, co-wrote and co-produced the short film “Danger Word,” based on their novel, Devil’s Wake. He and Due recently sold a cable TV adaptation–details soon!

Tananarive Due, a member of the Writer’s Guild of America (WGA), has been named to the Grio100 and Ebony Power 100. The Essence bestseller and NAACP Image Award winner has also won an American Book Award for The Living Blood. She recently received a Lifetime Achievement Award in the Fine Arts from the Congressional Black Caucus. She is the former Cosby Chair in the Humanities at Spelman College. In addition to co-producing and co-writing the short film “Danger Word” with Steven Barnes, she currently has several book projects under option. She and Barnes recently sold a cable TV adaptation of one of her ovels–details soon!

You may also email us your questions at Tanacoach@gmail.com.

Filed under On writing