This week, a story of an attempted lynching came across my Twitter feed and put a stone in my stomach: white teenagers in Claremont, New Hampshire, stood an 8-year-old biracial boy on a picnic table, tied a rope hanging from a tree around his neck, and left him to hang. According to witnesses, the child swung three times before he was able to free himself with a badly bruised neck. I first saw this story saw in the black online publication The Root, with no signs of it anywhere else. I could barely believe it was true. (It has since run in the Boston Herald and other media outlets, including the Washington Post.)

Like Emmett Till’s mother in 1955, his mother made sure the photo of her son’s injury was public—and we may know about this story only because of her tweet. His family has since alleged in Newsweek that police were slow to investigate and were dismissive of the case, saying “There’s nothing we can do” after the teens claimed it was an accident. (Apology for the graphic photo of his injury.)

“The doctors said he should have been dead,” his grandmother, Lorrie Slattery, said. 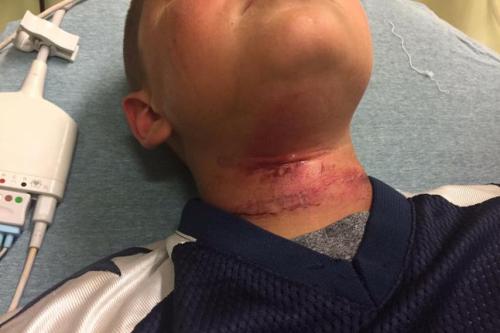 According to Newsweek, the teens had previously targeted the boy and called him “Nig–er.” At his Claremont vigil Tuesday, someone yelled out “White power!”

This incident is particularly troubling in my mind on the anniversary of the 1963 bombing of the 16th Street Baptist Church in Birmingham, where Addie Mae Collins, Cynthia Wesley and Carole Robertson (all 14) and 11-year-old Denise McNair lost their lives. Many more were injured. Racist attacks existed before Trump’s presidency, obviously, but he stands out as a president who has been noticeably slow to condemn them — or silent — no doubt in part over fear of alienating the racist core of his base. 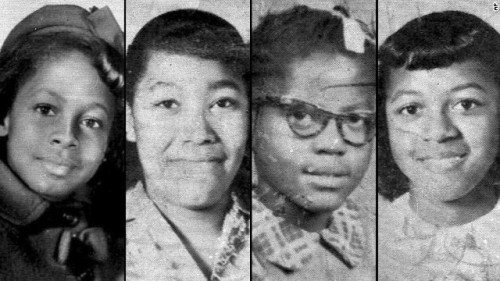 When I first saw the story of the New Hampshire attack, I was equally disturbed that Police Chief Mark Chase’s only initial comments centered the well-being of the perpetrators without a single denouncement of the crime.  “Mistakes they make as a young child should not have to follow them for the rest of their life,” Chase was quoted as saying.

His department has also been tight-lipped on the story further, with no statements making it clear that hate crimes will not be tolerated in his community—a case of dangerous, enabling silence instead of leadership.

Claremont now joins Charlottesville as another example of a spike in hateful rhetoric and attacks that have taken root during the Trump era of coddling white supremacy. Trump’s tepid response to the Charlottesville neo-Nazi march that resulted in the death of anti-racism activist Heather Heyer prompted Congress to pass a resolution condemning white supremacy. But even after signing it, Trump has returned to “violence on all sides” rhetoric that ignores the rise of armed right-wing militia group and hate crimes.

An attempted lynching in a mostly white town in 2017. Thankful this young man survived. We can’t let this story get lost.

My tweet about the attempted lynching got more “likes” and retweets than anything I’ve ever tweeted on my years on Twitter, as of now, 209,501 likes and 167,552 retweets. I also got more trolls than usual, quickly blocked: people more offended that I attributed it to “Tr*mp’s Amrica” than by the act itself; people who believe it’s racist to even discuss racist acts; people who apparently believe we should ignore racism rather than speak up for a brutalized child. Much of the blowback was denial; much was also the fear of societal change that fueled Trump’s election.

But most people of all races and ethnicities were simply as outraged as I was.

It actually goes deeper than outrage: despite everything I know about this nation’s violent racial history, I didn’t want to believe the story. I read the original story twice before I tweeted it, and even then I called the victim a “young man” because I made myself forget he’s only eight. Eight! A baby. Who could do such a thing to such a young child? On one level, I couldn’t wrap my mind around it, and neither could thousands of others who shared the story.

Soon before I read about the child in Claremont, I saw the new film adaptation of Stephen King’s It, where the terror of childhood bullying is personified in the form of an evil clown named Pennywise. In King’s story, and in the film, small-town bullies target all children who are misfits—including a black child named Mike Hanlon. In one scene, a pack of white bullies is severely beating Mike while Pennywise gleefully stares on.

Pennywise fomented evil in humans. That made perfect logical sense. Part of the success of the film is the idea that chasing and vanquishing Pennywise as a unified front provides cathartic release.

But there was no Pennywise in Claremont—only teenage boys whose friends and family members might characterize their behavior as typical “boys being boys,” perhaps from families who are “very fine people,” and a police chief whose primary focus seems to be to protect the perpetrators rather than condemning their crime and protecting future victims.

There is no demon to vanquish in Claremont—except the curse of human frailty and our country’s long history of racial and ethnic violence against the Other. The teenagers in Claremont were just the newest actors in a long-running play, like the men who beat 14-year-old Emmett Till to death over a lie.

Did someone “teach” the teenagers in Claremont hate? Or is hate in the air our young people breathe because of the stranglehold of white supremacy that makes it more offensive to call out racism than to act it out? When the president built his political credibility as a racist “birther,” calls Mexicans “rapists” during his campaign, surrounds himself with white supremacists, targets Muslim refugees, and is reluctant to call out neo-Nazis with the full authority of is office,  that is lesson enough for all of us.

Sometimes fiction is the only way to make sense of the insensible.

I was 14 when Miami burned in insurrection after police officers were acquitted for murdering black motorcyclist Arthur McDuffie in 1980, and I discovered that writing might save my life when I wrote a utopian prose poem called “I Want to Live”—simultaneously envisioning the better I future I wanted and staking my claim in it.  I also tackle the inter-generational cost of racism in my novel The Good House, where a demon again shoulders at least some of the blame.

Author Kai Ashante Wilson was shortlisted for both the Hugo and Nebula awards for his unforgettable 2014 novelette “The Devil in America,” which contextualizes racial violence as the work of the devil and makes the devil real enough to touch. It’s not a happy story, but it’s an instructive and gut-wrenching one that many readers of all races and ethnicities believe was the best speculative fiction story of that year. (IF you haven’t read it, read it here NOW.)

As painful as Wilson’s story is, the logic of devilry at work in “The Devil in America” seems strangely comforting in the face of our ongoing challenge of healing our nation’s racial wounds. At the core of Wilson’s story is a cautionary tale of what happens when we abuse power even a little, or when we make deals with those we shouldn’t.

In real life’s headlines, all we’re left with is a horrid tale of a child’s lynching and the stubborn belief by so many people around us that when it comes to racism, the only devil is the messenger.

Tananarive Due is an American Book Award-winning author who teaches Afrofuturism and Black Horror in the African-American Studies Department at UCLA.

Filed under On writing, Social Justice

Tagged as 16th Street Church, Claremont, horror, IT, Tananarive Due, The Devil in America, Writing Horror