Writing through the Fear

Years ago, I had the opportunity to work with the Alex Haley Estate to write a novel on the life of Madam C.J. Walker, The Black Rose.   I had access to papers, letters, documents and transcripts Haley had compiled while he was researching his novel before his death. 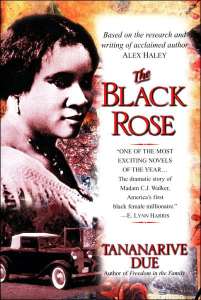 In one transcript, Haley was getting a pep talk from a relative, akin to “You can do it!”  I wondered if Haley had felt daunted by his success after Roots.  How do you follow up an international blockbuster?

That pep talk stuck with me.  There I was, a young writer trying to write my first historical novel on a tight deadline in partnership with a beloved author’s estate, and I felt gripped by fear each day.  I stared at Madam Walker’s photo for inspiration.  I thought about my parents’ civil rights battles in the 1960s.  Whatever it took.

You can do it, I told myself.   Haley’s pep talk could have been for me.

Fear touches all of us, and it can be crippling.  Fear is also sneaky; it whispers to us in a voice that sounds very much like our own.

I’ve wrestled with those voices nonstop while I’ve been working on my current writing project, tentatively entitled Blood Prophecy, the fourth book in my African Immortals series that began with My Soul to Keep.  Each new book feels like a lot to live up to.

Here’s what happened recently:  With an eye toward the deadline, I expanded my outlining process by creating index cards for my remaining scenes.  I was writing an especially difficult portion of the book—a reintroduction to the colony of immortals in Lalibela, Ethiopia, that first appeared in The Living Blood,  entering my fantasy realm more deeply.

And my writing was speeding up.  Considerably.  My page quotas from the early pages felt slim compared to my new marathon writing sessions.  I was on fire!

This is CRAP! my voice shouted to me.  You’ll have to throw it all out.   Slow down.

It was a Friday afternoon, and the inspiration seeped right out of my head.  The characters—who had felt real enough to hear and touch a moment before—morphed to mere symbols on a page.  It looked like a mess.  I still had two more hours before my son came home, but that brought the end of my writing day.

You can guess what happened next:  I read the Friday pages over the weekend, and they were fine.  First draft, of course, ripe for texture and tweaking, but the revisions came easily.  And quickly.  And I’ll have plenty of chances to revise it later.

I had psyched myself out of a stellar writing day because I got scared.

Fear has stopped me before.

After I wrote The Between, my first novel, it sat in a drawer for a year because it had been rejected exactly twice, by a contest and a mega-agent.  I convinced myself it had been only an exercise, that it wasn’t good enough.   A year later, when I got the confidence to begin submitting, I found an agent immediately…and she sold it in two weeks.

As a writer, my fear has manifested in many ways, always slowing me down.

And I’m not alone.  My husband and collaborator, Steven Barnes, surveyed 300 writers on what they most wanted to see in a writing course.  The top answer had to do with addressing fear.  (His free course, “The Seven Faces of F.E.A.R.,” is available at www.diamondhour.com.)

No matter how many times I undergo the cycle, once in a while my fear voices fool me.  In book after book, I have to remind myself to ignore the voice that says that whatever I’m writing won’t measure up to my previous work.  It’s so unfair to compare first drafts to finished books!

I can only imagine how Alex Haley felt.

But I’m happy with the progress of Blood Prophecy.   I’m having a reunion with old characters, and learning more about new ones.

And I’m writing it as fast as I can, without fear.

Filed under On writing

Tagged as Blood Prophecy, facing fear, On writing, Tananarive Due